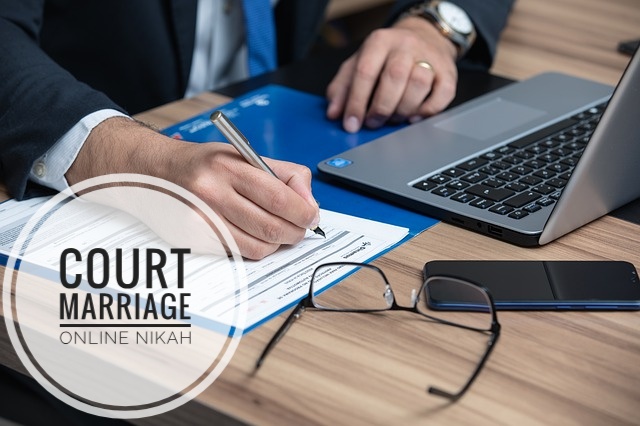 Court Marriage/Online Nikah
Court Marriage in Lahore, Pakistan;
The concept of Court marriage in Pakistan came into the Subcontinent from English law. Initially, this idea was supported social customs and religion of parties to the wedding contract. But, now it is codified not only in Pakistan but also in India and other countries of the world. India, the United Kingdom, the United States and many other counties have their separate “Court Marriages Acts” which define the procedure of solemnizing a marriage under the supervision of the court.

The basics of human nature and ethical values of all societies are almost the same; therefore, public acceptance of court marriage in pakistan is far lesser than that of traditional and religious marriages. No society likes to keep marriages secret.

If we analyze the situation, we find that a court marriage in pakistan is contracted when one or both parties to the marriage either could not get the consent of their parents or they fear they will not be allowed to marry each other. The situation can also arise because of different social or economic stature of the 2 families. Differences of religious sects, customs or even enmity and bad blood between the two families may also cause such issue and it leads the parties to solemnize their marriage against the will and wishes of their families. So, the boy and the girl decide to elope and reach the court for court marriage.

Pakistani Constitution has given Right of Freedom to pick an individual to urge married to. We support the youth in order that their requirements must be satisfied through Court Marriage in pakistan.

For Court Marriage / online nikah, The girl has to appear before the judicial officer or oath commissioner to sworn through the affidavit of her Free Will that she is Sui Juris and with her own free will she goes to marry with a person of her own choice.

That after scrutiny of the specified documentation their Nikah/Court Marriage are going to be performed and registered within the concerned union council. The Nikah Registrar will prepare and issue Nikah Nama and therefore the Secretary of Union Council will issue a Computerized Marriage Certificate.

Before or after muslim court marriage in pakistan if somebody creates harassment among the male and female, they can file writ petitions in the court of law for the protection of their life and family.court marriage in pakistan If somebody gets register any false FIRs against the male and feminine , they will file a writ petition within the supreme court for the quashment of such FIRs

Documents required for Court Marriage:
For Court Marriage / online nikah, Male and female must provide the copies of their Passports, CNIC, “B” Form or Educational Certificates as a symbol of their age and other particulars.

For court marriage / online nikah, Affidavit of female regarding her Free Will, Matrimonial Status, and age (Affidavit must attest by the justice of Peace, Special Magistrate or Oath Commissioner).

Affidavit of male regarding his Matrimonial Status (Affidavit must attest by the justice of Peace, Special Magistrate or Oath Commissioner).its requirement for court marriage.

For court marriage / online nikah: within the case of 2nd marriage the male has got to provide the documents for permission of second marriage.

For court marriage 6 Passports size photos of both male and female will be required to be affixed on documents.

To witness of the court marriage, 2 Witnesses of marriage having CNIC or Passports for verification of their particulars.
A divorced male and female must provide the Copy of the Divorce Certificate issued by the union council.

If anyone may be a widow or widower they need to provide Death Certificate of a deceased partner.